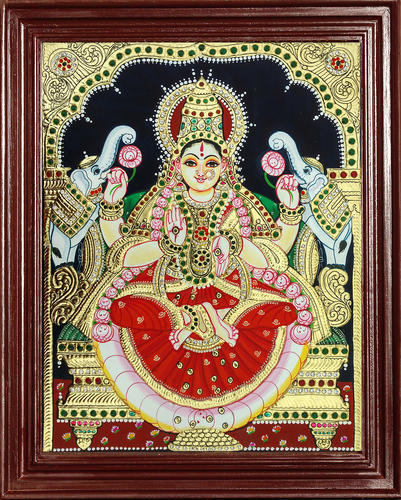 Tanjore or Thanjavur painting is an ancient Indian folk art form that originated in the town of Thanjavur in South India.

It is a traditional South Indian painting style and it dates back to 1600 AD.

These paintings are known for their use of gold foil which gives the painting a surreal look, the colorful panel painting done on a wood plank and a deity being the main theme of the painting, their use of semi-precious stones and vibrant colors.

The main themes of the Tanjore paintings are Hindu deities, saints, scenes from Hindu Puranas, Sthala-Puranas and mythological, etc.

An amazing fact about Tanjore paintings is that the shine of the gold leaves which are used in these paintings last forever.

From down South, Tanjore or Thanjavur paintings originated in 1600 AD, encouraged by the Nayakas of Thanjavur.

It borrows its styles from Maratha and Deccani art, as well as European styles.

With roots in the Vijayanagara School of painting, Tanjore painting (also known as Thanjavur painting) originated in the Maratha court of Thanjavur (1676 – 1855).

Episodes from Puranas and other religious texts were sketched or traced and painted with the main figure or figures placed in the central section of the picture mostly within an architecturally delineated space such as a mantapa or prabhavali surrounded by several subsidiary figures.

Traditionally, a Tanjore painting was generally made on a canvas pasted over a plank of wood with Arabic gum.

The canvas was then evenly coated with a paste of powdered limestone and a binding medium and dried.

The artist then drew or traced the main subjects using a stencil.

A paste, made of limestone powder and a binding medium called sukkan or makku, was used for creating the Gesso work.

Finally, colours were applied on the sketch.