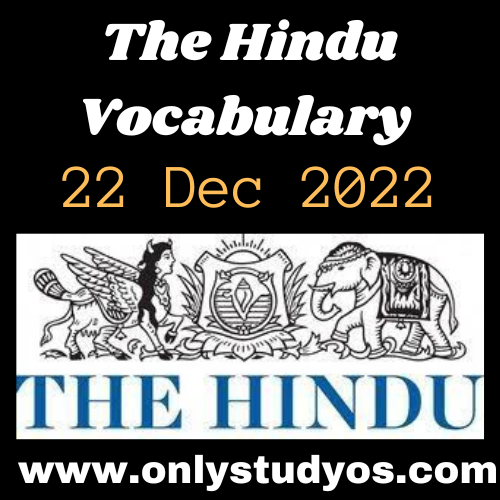 2-Intend(Verb): इरादा करना: To have as a plan or purpose
Synonyms : Deliberate , Intentional
Antonyms : Accidental , Expected
Example Sentence: We intend to go to Australia next year to visit our daughter.

3-Assertion(Noun) : अभिकथन : A statement that you strongly believe is true
Synonyms: Affirmation , Declaration
Antonyms : Denial , Rejection
Example Sentence: I certainly don’t agree with his assertion that men are better drivers than women.

4-Rebuttal(Noun) : खंडन : A form of evidence that is presented to contradict or nullify other evidence that has been presented by an adverse party.
Synonyms: Confirmation
Example Sentence: I’m going to have to issue a rebuttal about this.

6-Rhetoric(Noun) : भाषण कला : Speech or writing intended to be effective and influence people
Synonyms : Oratory , Hyperbole
Example Sentence: His speech was dismissed as mere rhetoric by the opposition.

7-Amenable(Adjective) : आज्ञाकारी: Willing to accept or be influenced by a suggestion
Synonyms: Susceptible , Responsive
Antonyms : Irresponsible , Uncooperative
Example Sentence: The employees were not amenable to the control measures which were suggested.

8-Linguistic(Adjective): भाषा-संबंधी : Consisting of or related to language.
Example Sentence: These ideas rapidly became the new orthodoxy in linguistics..

10-Demarcated(Verb) : सीमांकन करना : To show or mark the limits of something
Synonyms: Bounded , Restricted
Antonyms : Unlimited
Example Sentence: The boundary between the countries must be clearly demarcated.